Mahindra has launched its new SUV as XUV700. The new platform has the new monocoque which is 80% stiffer than that of XUV500’ with spot welds and adhesive bonding. Mahindra has reduced weight with a monocoque frame, lightweight high-tensile steel and lighter engines weighing around 70kg less than the previous one. Kerb weight is heavy (1,960kg-2,040kg) but with many additional equipments and safety features, that cannot be considered as s drawback. 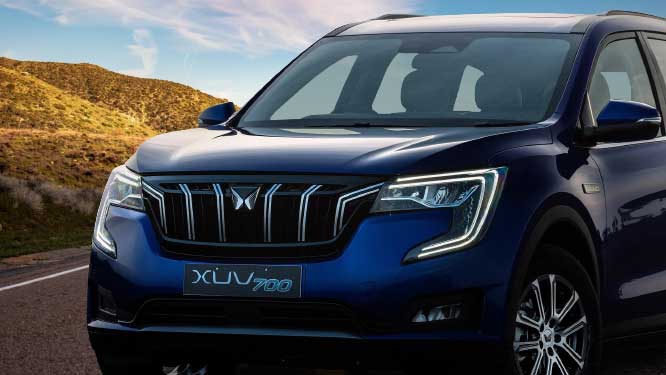 The rear tailgate is made up of composite plastic for weight reduction which may have to be replaced if rear-ended in an accident. The platform is configured for front-wheel-drive and all-wheel-drive options. It is designed to accommodate a 48V mild-hybrid system in future. The engine line-up has two brand-new engines namely the latest-gen 2.2-litre mHawk diesel and mStallion 2.0 turbo-petrol. The base diesel variants get a 155hp rated motor and higher variants get 185hp. The 2.0 turbo-petrol, variable valve timing, turbo power and direct-injection produces a 200hp. The new platform has the latest-gen (E/E) architecture with an advanced infotainment system (Visteon) and advanced driver assistance systems (ADAS). Mahindra is clearly made it a point to become the winner in the tech competition!

The XUV700’s styling is the evolution of XUV500, with specific lines and a extra balanced look. It is a little shorter than its predecessor by 30mm and has a muscular bonnet. The strong new grille with twin vertical bar gives it more road presence. The way the outside vertical bars bend and flow into the headlight cluster is just adorable. Mahindra’s new Twin Peaks’ logo has been introduced on the XUV700 at the centre of the grille which is exclusively for the SUV range of the manufacturer. The new profile is the most refined one and no more numerous rear wheel arch lines and odd cheetah paw handles. They are replaced by flush door handles which pop automatically when you near the car. These are handy and easy to use. The mid versions had a handle that you need to push and the base variant had a cumbersome click to unlock, push and pull to close and open the door. At the rear, there are arrow-shape tail-lights but the design feels same as some other car. The long DRLs and the excessive sculpting of the wheel arches are other drawbacks in the design and style area.

The plain interior design gives more eminence to the display panel that stretches for about half the dashboard. This Mercedes-like tablet lodges the central touchscreen and an all-digital instrument panel, measuring 10.25 inches. This premium look will be surely admired by consumers of all the higher versions. The base has a small 8.0-inch infotainment unit and a 7.0-inch instrument cluster.

The dashboard is made up of plastics and leather strip which ends with wood finish which gives an artificial look. The gaudy piano black finish also is not so appealing. The fit, finish and material quality are pretty good but not completely awesome.

Buttons and dials for HVAC controls, the rotary controller on the centre console and the toggle-like switches for key functions are really welcoming. The two shelves in the central consoles for phones of which one is a wireless charger is admirable. Nowadays, storage for two phones is important than cupholders which are also available on the console at the back of the gear lever.

The steering wheel is nice to hold and the buttons have access to many functions. The instrument panel, though with sober graphics and fonts, is still incredible because of its rich information. There are many customisable options for both the screens.

The XUV700 debuts Mahindra’s new advanced AdrenoX infomatics system. It is packed with features and options along with other built-in local apps. However, the segregation and layering of the menu needs to be modified because it is not an easy job to find out where things are.

The seats are large but cushioning cannot be graded as excellent. But still, it keeps you comfortable even after long hours of travel. The XUV700 has 5- and 7-seat configurations. In the three-row version, even though the legroom in the middle row is not spacious as Hector or Safari, there is enough space to even accommodate tall passengers. The third-row does not have enough room with a very limited headroom. The AC vents and the glass area occupy more space.

The gear lever, rotary controller, and the power window switches are set too much at the rear. The third-row reclining mechanism should be at the top of the seat instead of being behind. Boot space is limited when the third row is up. There is enough luggage room when the third row is folded down. If you are shifting the spare wheel’s location from beneath the boot floor to beneath the chassis, more free space can be availed.

Drivability is good with its ample torque. The biggest area of improvement is the dynamics. The jittery ride, the torque steer and the sloppy handling are replaced by easy, steady and predictable handling due to best suspension system. Road grip and cornering are good. The electric power steering gives the right feel. It is light at low speeds and at the same time, safe at higher speeds. On the high-speed track, the XUV700 would be a good performer at triple-digit speeds. It is heavy and the ride is also not quite settled when compared to its rivals’ performances.

Mahindra has put a lot of effort for more safety and hence XUV700 is also expected to be a safe vehicle. XUV700 has a very advanced ADAS package. The system uses camera and radar with Forward Collision Warning (FCW) and Autonomous Emergency Brakes (AEB) that do a good job. Also, Adaptive Cruise Control (ACC), Smart Pilot Assist or traffic assist (AT only) are added benefits. Fine-tuning is needed for Lane Keep Assist which works well in corners but fails to keep the car centred on straights. But the ADAS package is very commendable and revolutionary. Driver drowsiness detection, personalised safety alert, auto high beam assist, illumination above 80 kph and booster headlights are other safety advantages.

Mahindra is planning to fight back with Tata Motors, Hyundai and new entrants like Kia by introducing the XUV700. Keeping the variants and prices aside, the XUV700 has a very compelling package. In spite of some missing features like not-so-comfortable seats and not-so-updated infotainment system, it cannot be ignored that it is a best and safe vehicle for long travels. The brilliant engines just beat the competition away. It is easy to drive with its many incredible features. The Mahindra XUV700 would be the winner!

Tata Tigor EV is the most affordable electric car for the people of India with a combustion-engined alternative. Buying an EV has now become affordable…

In India, the demand for a mid-level sporty sedan is increasing day by day. Recently, BMW launched such a model, the M340i, and now Audi…

TVS has launched the new better and higher CC model scooter branded as Jupiter 125. The Jupiter 125 is a complete family scooter for India…

TVS has launched the new better and higher CC model scooter branded as Jupiter 125. The Jupiter 125 is a complete family scooter for India…

The Ducati Monster had changed a number of looks since many years. It was presented as a stripped-superbike, a modern-retro, an urban model and many…